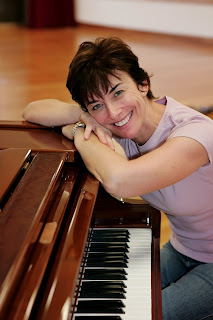 Paula completed a Bachelor of Arts (Creative) with distinction at USQ, graduating in 1996.

After completing her bachelor degree she continued her music studies with a Graduate Diploma of Music in 1997 and a Master of Music in 2001.

Paula was employed at USQ as a Lecturer in Music and Music Education from 1996 until January 2008.

In 2003 she was the founding Director of the Junior Academy of Music at USQ.

Her approach to music in the early years is documented in her book, ‘Music, Moving & Learning in Early Childhood: a manual of songs, lesson plans and basic theory for teachers, students and parents of young children aged 3-5 years’ published in 2006.

Earlier in her career, Paula undertook music and dance training in London and held teaching positions in England, France, Hong Kong and Australia working with children, tertiary students, teachers, dancers and actors in many areas related to music and movement.

She has a special interest in working with musicians and teachers in the area of kinaesthetic imagery and response which is a unique and innovative approach to music education and performance.

Her research into Music & the Body received a highly commended award from the Musicological Society of Australia.

As a Dalcroze specialist and experienced musician, Paula is a regular guest teacher at many workshops and conferences including the national AUSTA string conference, the National Institute of Education in Singapore, the Dalcroze International Summer Schools, the UQ Summer Music Program, the USQ Residential Music Pedagogy School, the Qld Orff Schulwerk Association, Nudgee International College and the Queensland Youth Orchestra Camps.

Paula is a regular consultant to several Early Childhood Centres.

She has been a lecturer in Early Childhood and Primary music and conducted many music workshops for teachers over the past decade in Australia and overseas.

She conducts music and movement classes for children and teaches piano from her studio in Toowoomba.

As president of the Toowoomba Eisteddfod she is actively involved in supporting music in the community.

from your USQ Music Colleagues

To enquire about studying music at USQ

Contact the School of Creative Arts on 07 4631 2285 or see the USQ Music Website http://www.usq.edu.au/handbook/current/arts/BMUS.html for details of the new Bachelor of Creative Arts.